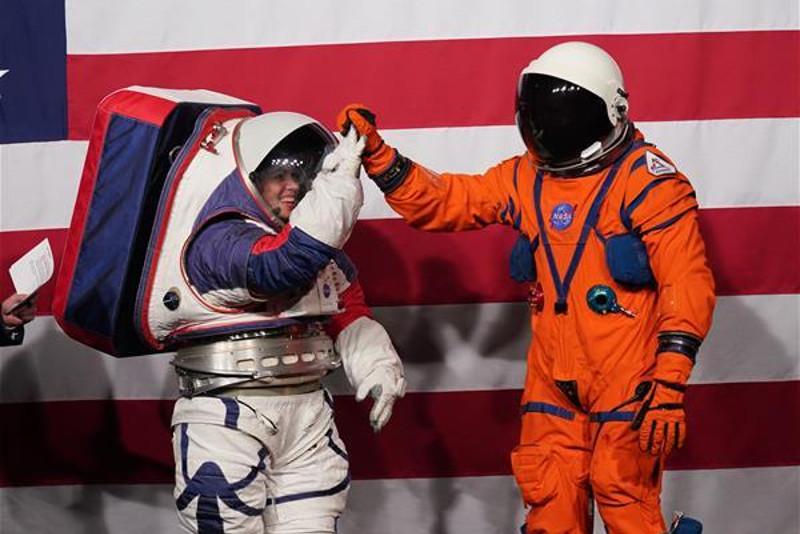 WASHINGTON. KAZINFORM - The U.S. space agency NASA unveiled on Tuesday the next-generation spacesuits to be used in its Artemis program that will send the first woman and next man to the Lunar South Pole by 2024.

NASA Administrator Jim Bridenstine showcased the ground prototypes of two spacesuits designed for lunar exploration: one for exploring the Moon's surface, known as the Exploration Extravehicular Mobility Unit (xEMU), and one for launch and re-entry aboard the agency's mew Orion spacecraft, known as the Orion Crew Survival System.

The xEMU, a red, white and blue suit, is composed of the pressure garment and a life-supporting backpack, and it can protect the astronauts from radiation, temperature extremes, and micrometeoroids, according to NASA.

According to Xinhua, one of its advantages compared with previous ones goes to its better mobility. At Tuesday's launch event, a female NASA engineer who wore the xEMU for demonstration played deep squat, full arms spinning and delicate fingers movement with much ease.

The suit's advanced mobility that enables them to accomplish much more complex tasks on the Moon's surface is partly attributed to its joint bearings, instead of zippers, on the lower torso and upper torso.

Those bearings allow full rotation of the arm from shoulder to wrist, bending and rotating at the hips, increased bending at the knees and hiking-style boots with flexible soles, according to NASA.

The xEMU has a rear-entry hatch, so astronauts can climb into it from the back of the suit, allowing the shoulder elements of the hard upper torso to be closer together than the suits currently in use, thus enabling a better fit while reducing shoulder injury risks.

Also, the spacesuit is a modular one. Its helmet features a quick-swap protective visor that protects the pressurized bubble from any wear and tear or dents, and scratches from the abrasive dirt of planetary bodies. It means that astronauts can replace only the visor before or after a spacewalk instead of sending an entire helmet back to Earth for repairs.

Before the first lunar landing in 1969, engineers worried that the lunar soil wouldn't support the weight of a spacesuit and the astronaut inside, but now a greater danger is that the lunar soil is composed of tiny glass-like shards which may damage the suit.

Astronauts in the International Space Station will test the new spacesuits in coming years and it will be used in a small space station in lunar orbit and on Mars.

Bridenstine also demonstrated the Orion Crew Survival System at the event. The orange suit will be worn during launch and re-entry of NASA's new spacecraft to provide thermal protection for the astronauts in case of a depressurizing accident.