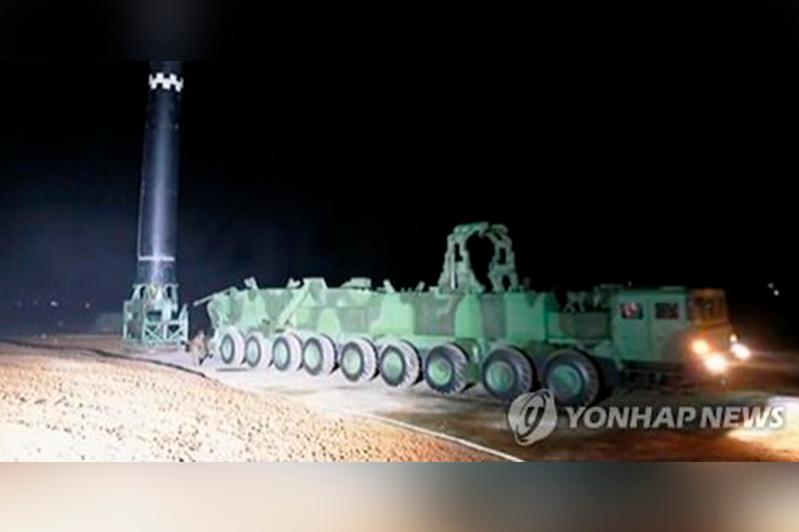 The issue has been a source of controversy in Seoul, after Chung Eui-yong, chief of Cheong Wa Dae's National Security Office, has said it is «technically difficult» for the North to fire ICBMs from mobile launchers. Conservative critics accused Chung of being naive.

«The chief of the Defense Intelligence Agency (Kim Yong-hwan) said that he does not believe that North Korea has such capabilities,» Rep. Lee Hye-hoon, the chief of the intelligence panel, told reporters during a parliamentary audit into the agency.

Kim was also quoted by Rep. Lee Eun-jae of the main opposition Liberty Korea Party as saying that North Korea tried to fire an ICBM from a TEL but failed to do so due to some unidentified problems.

Wednesday's comment is contradictory to his earlier assessment. During an audit into the Joint Chiefs of Staff (JCS) earlier this month, Kim said that North Korea's ICBM technology «has been advanced to the degree where the missile can be fired from a TEL.»

Missiles fired from TELs pose greater threats as they can move around freely and are harder to detect.

During three rounds of ICBM tests in 2017 -- twice involving the Hwasong-14 and once with the Hwasong-15, North Korea used TELs to transport the long-range missiles to its test sites, and fired them from a launch pad fixed on the ground.

«To protect those vehicles during test launches they were using this mode. But in an actual conflict, North Korea in my view could use transporter erector launchers to operationally operate ICBM missiles,» Ankit Panda, a researcher at the Federation of American Scientists, said, according to the Voice of America.

The Hwasong-14 ICBM, with a range of around 10,000 kilometers, is capable of reaching most of the continental U.S., and its Hwasong-15 ICBM has an estimated range of over 12,000 km so that it can reach anywhere on the U.S. mainland, according to U.S. Forces Korea.

Following the controversy, a JCS officer said that the agency chief did not contradict himself, as «he today mentioned the current level of technology, and what he meant during the JCS audit is the mobility of the missiles through TELs as well as the overall possibility of the North's tech advance.»

Kim also noted that North Korea used solid fuels during 11 to 12 rounds of missiles tests so far, and it has been accelerating efforts to adopt solid fuels to replace liquid ones to have advantages in surprise launches, according to the lawmakers.

But it is not clear if the North's ICBMs also employed solid fuels.

As for two projectiles that North Korea fired on Oct. 31, Kim told lawmakers that the intelligence authorities see them as «ballistic missiles.»

The communist country claimed that it tested a «super-large» multiple rocket launcher, and Seoul's military authorities have said it is analyzing to determine the exact type of the projectiles in close coordination with the United States.