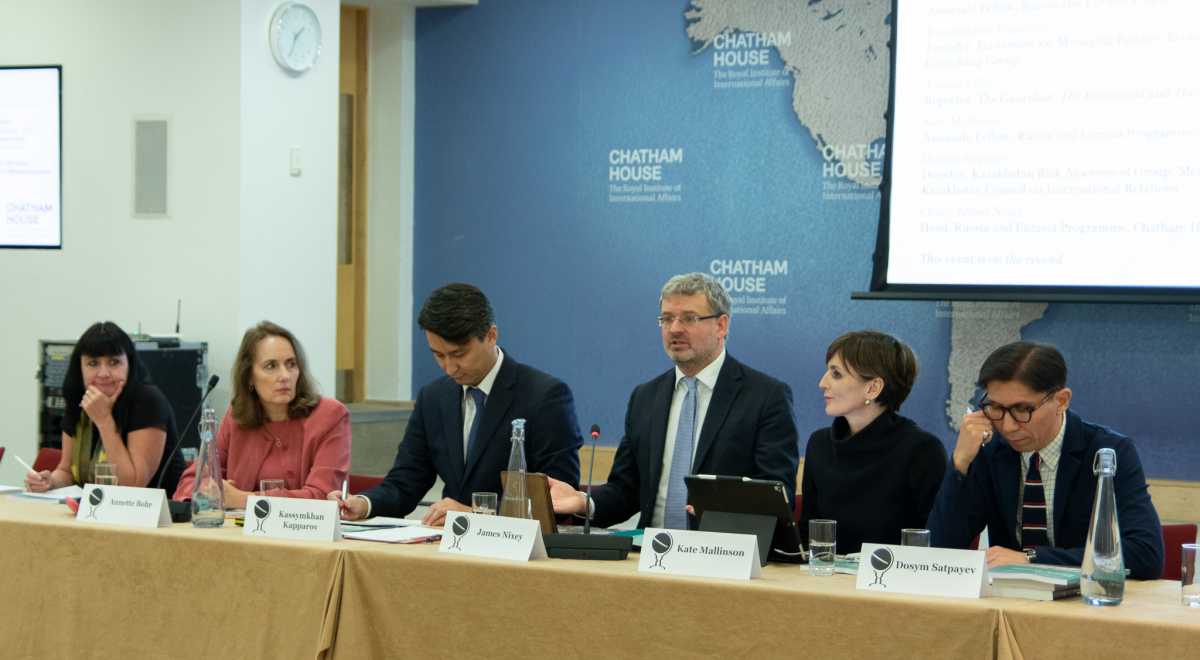 LONDON. KAZINFORM Kazakhstan’s political and economic reforms, as well as the country’s further development were at the core of discussion at the Royal Institute of International Affairs, also known as the Chatham House, the press service of the Kazakh Embassy in London informs.

The event at the UK’s leading analytical centre presented the «Kazakhstan: Tested by Transition» report dedicated to the current state and prospects of Kazakhstan’s development.

Kazakh experts participated in the discussion alongside prominent representatives of the UK scientific circles. The Kazakh side was represented by the Director of the Institute for Security and Cooperation in Central Asia Shavkat Sabirov and the Managing Partner of GEC Corporation Chingiz Kanapyanov.

The Chatham House report consists of nine chapters and covers such topics as the transit of power, economic development, the country’s relations with Central Asian states, Russia, China and the West, as well as the issues of identity and human rights protection.

The report also contains practical recommendations for Kazakhstan’s further multifaceted development, as well as for the West – in terms of increasing Kazakhstan’s importance in its foreign policy priorities.

According to Mr. Nixey, Kazakhstan has been an overachiever in its region, but it needs to go further in order to meet its own ambitions that it has set for itself.

The Ambassador of Kazakhstan to the United Kingdom Erlan Idrissov noted that Kazakhstan is actively addressing many issues, including in international relations, environmental protection, economic development, the Astana International Financial Centre, and the implementation of its own development model. He also highlighted that the country at this stage focuses on developing human resources and supporting the younger generation.

The event at the Chatham House was preceded by the Kazakh experts’ meeting with the Henry Jackson Society, an analytical centre focusing on foreign policy, security, counterterrorism, social and political risks in Eurasia.

The UK side spoke about their work, the reports the Society publishes on various relevant topics, as well as the Brexit-related political processes taking place in the UK.

The Kazakh experts briefed their British colleagues on the political and economic reforms underway in Kazakhstan.

To conclude the visit, the Kazakh experts met with students from Kazakhstan studying in UK universities. During the meeting at the University College London, Mr. Sabirov and Mr. Kanapyanov discussed the prospects for innovative and sustainable development in Kazakhstan and the future of Kazakhstan’s science, as well as shared their experience of working in scientific and expert community.

The meeting with the students was organised by the Kazakhstan PhD Association in the UK. The association includes about 80 PhD students from Kazakhstan studying at UK universities.