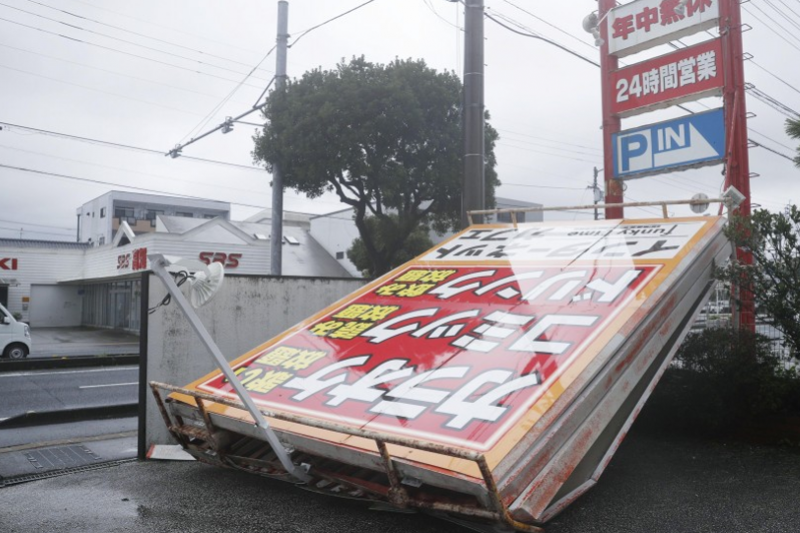 TOKYO. KAZINFORM Heavy rainfall and strong winds continued to hit Japan on Friday as a powerful typhoon stayed over the Sea of Japan after ripping through the western part of the country the previous day, with warnings issued for landslides and floods.

Typhoon Krosa, which has left one man dead and about 50 people injured, also stranded some 1,700 passengers at Kansai airport in Osaka through the night with 232 domestic and international flights canceled. The main international air gateway in western Japan had been crippled by a powerful typhoon in September last year, Kyodo News reports.

As of 9 a.m. Friday, it was moving north-northeast at a speed of 35 kilometers per hour from 410 kilometers off Sado Island in Niigata Prefecture, with an atmospheric pressure of 980 hectopascals at its center and packing winds of up to 126 kph, according to the Japan Meteorological Agency.

As the season's 10th typhoon weakens after crossing western Japan, it is expected to be downgraded to an extratropical cyclone by early Saturday, traveling northeast in the Sea of Japan close to the northernmost island of Hokkaido, the agency said.

At the Kansai airport terminal building, long lines were formed by passengers to receive drinking water and sleeping bags that were distributed for free as they spent the night there.

The operator had stocked items such as water and blankets for 12,000 people after the typhoon last September left about 8,000 people stranded when strong winds caused a tanker vessel to crash into the sole bridge connecting the airport, located on a manmade island, to the main island of Honshu.

«We didn't have enough money to stay at a hotel, so it was a relief to be given a sleeping bag,» said Seiya Kurokawa, a 20-year-old university student who was scheduled to travel to Thailand.

In the 24 hours through 6 a.m. Saturday, the weather agency forecasts 250 millimeters of rain in Hokkaido, 150 mm in the Tohoku region and 120 mm in the Tokai area.

Hokkaido is also forecast to see gusts of 126 kph, while the Tohoku, Hokuriku and Kinki regions will see winds at a speed of 108 kph, the agency said.