SEOUL. KAZINFORM South Korea reported the largest job loss in December since 1999 as a resurgence in new coronavirus cases dealt a blow to jobs in the service sector, data showed Wednesday.

For the whole of 2020, the country also shed the largest number of jobs since 1998, when the country was in the midst of the 1997-98 Asian financial crisis, according to Statistics Korea, Yonhap reports.

The number of employed people reached 26.5 million last month, 628,000 fewer than a year earlier and marking the 10th straight month of job losses, the data showed.

It marked the sharpest on-year fall since February 1999, when the country lost 658,000 jobs in the wake of the Asian financial turmoil.

The country has reported job losses every month since March, when the nation lost about 195,000 jobs, the first on-year job loss since 2009, due to the fallout of the pandemic.

Last month, the pace of the decline in job losses accelerated as the country raised social distancing guidelines amid a resurgence in COVID-19 cases. In November, the number of employed people fell 273,000 on-year.

On Dec. 8, South Korea raised its virus curbs to Level 2.5, the second highest in its five-tier scheme, in the Seoul metropolitan area, home to half of its 51.6 million population, and to Level 2 in the rest of the country.

Last year, the number of employed people came to 26.9 million, 218,000 fewer than the previous year.

It also marked the largest decline since 1998, when the country lost 1.28 million.

The data showed the local job market remains in limbo even as the Korean economy is slowly recovering on improving exports.

«For the whole year, the face-to-face service sectors suffered larger job losses, and temporary workers, young adults and those in their 30s took a beating,» Jeong Dong-myeong, a senior Statistics Korea official, said at a press briefing.

Finance Minister Hong Nam-ki voiced «deep» concerns about a slump in the job market, saying that the government will draw up additional measures to prop up the labor market, if needed.

Last month, the employment rate for those aged between 15 and 64 reached 65.3 percent, down 1.8 percentage points from a year earlier. 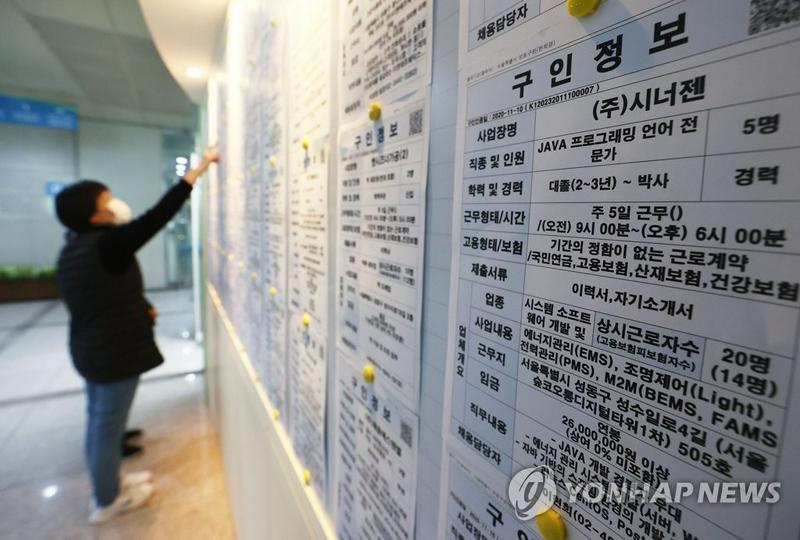 The unemployment rate for young adults -- those aged between 15 and 29 -- came to 8.1 percent in December, up 0.8 percentage point from the previous year.

Job losses were pronounced in the service sector, and the manufacturing segment was also hit hard.

The accommodation and food service segment reported an on-year fall of 313,000 jobs last month, and the wholesale and retail sector lost 197,000 posts.

The manufacturing sector, the backbone of the country's economy, lost 110,000 jobs on-year in December, compared with a fall of 113,000 posts in November.

In its 2021 economic policy plan, the finance ministry said the number of employed people is expected to grow by 150,000 this year, a turnaround from last year's estimated job losses of 220,000.