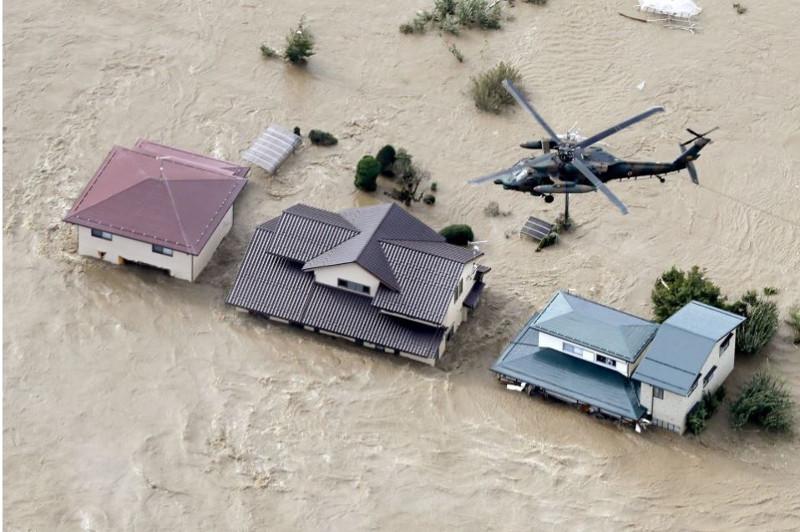 TOKYO. KAZINFORM - At least 19 people have died, and another 16 are missing as Typhoon Hagibis lashed Japan, including the Tokyo metropolitan area on Saturday, with many rivers overflowing into residential areas across a wide area of the country.

Around 100 people were injured across the country, according to a Keyodo News tally based on information provided by rescuers and other authorities.

The central Japan city of Nagano was one of the hardest-hit areas as the bank of the Chikuma River collapsed, causing massive flooding in residential areas, with the land ministry estimating that some of those areas may see floodwaters of up to 5 meters deep.

Over 6 million people across Japan's main island of Honshu were advised to evacuate, with train operators suspending most services and airports shut down in the metropolitan and surrounding areas between Saturday afternoon and early Sunday.

While evacuation advisories had been lifted by early Sunday in Tokyo and most of central and eastern Japan, the Ministry of Land, Infrastructure, Transport and Tourism said at least 48 landslides and mudflows have been reported in 12 prefectures, and nine rivers burst their banks.

The Japan Meteorological Agency had issued the highest warning on its one-to-five scale for Tokyo and the prefectures of Gunma, Saitama, Kanagawa, Yamanashi, Nagano, Shizuoka, Niigata, Fukushima, Tochigi, Ibaraki, Miyagi and Iwate.

Some dam operators have authorized water releases as an emergency measure to avoid possible dam bursting.

According to the local coast guard, a Panamanian cargo ship with 12 crew members is believed to have sunk in Tokyo Bay on Saturday night, where there were strong winds and heavy rain from the typhoon. Five crew members were rescued Sunday morning, but one of them was later confirmed dead.