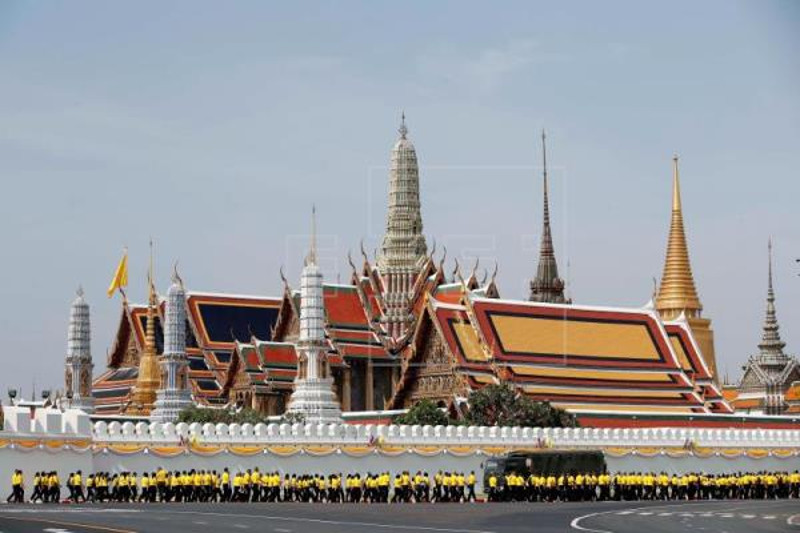 NUR-SULTAN. KAZINFORM -The King of Thailand on Sunday granted titles to members of the royal family during the second day of the three-day coronation ceremonies marking the third year of his reign, EFE reports.

King Maha Vajiralongkorn, who on Saturday had been bestowed with a spiral-shaped golden crown weighing 7.3 kilograms (16 pounds), was set to later lead a procession that will leave from Bangkok's Grand Palace at 4.30 pm (9.30 GMT) and cover a route spanning 7 kilometers (4.3 miles) while stopping at different temples.

The king will parade on a palanquin carried by 16 people in a procession that is expected to see some 1,300 participants.

Around 33 streets in the Thai capital's Old City will be closed down for several hours due to the parade.

After being purified with holy water by Brahmins - Hindu high priests - on Saturday, the king became "Devaraja," a divine Hindu king, according to Thai tradition.

Dressed in traditional gilded attire, King Vajiralongkorn also participated in a ritual at the Emerald Buddha temple, located within the premises of the Grand Palace, to proclaim himself as "Dhammaraja," or protector of Buddhism.

The 66-year-old monarch was accompanied during the sumptuous rites at the Grand Palace by his newly-wed spouse, Queen Suthida.

He had already acceded to the throne in late 2016 - following a three-month mourning period - upon the death of his revered father, Bhumibol Adulyadej.

In Thailand, the official coronation is often held on a later date than the proclamation - for example, the previous king was crowned four years after assuming his royal duties.

King Bhumibol was considered by many to be the father of the nation and seen as a guiding figure by a majority of the Thai population. He was widely venerated with almost religious fervor and was often given the epithet "Bhumibol the Great."

His son and successor, the now-King Vajiralongkorn, spends most of his time in foreign countries, although he has continued to support several rural areas and hospital projects initiated by his father, who earned prestige and acclaim through his social works.

At least 10,000 security personnel have been deployed around the palace, where the coronation ceremonies will continue until Monday with a cost of approximately 1 billion baht ($31 million).

Due to a decision by local authorities, the final coronation ceremonies will be attended by members of the diplomatic corps but not leaders or representatives of foreign royal families.