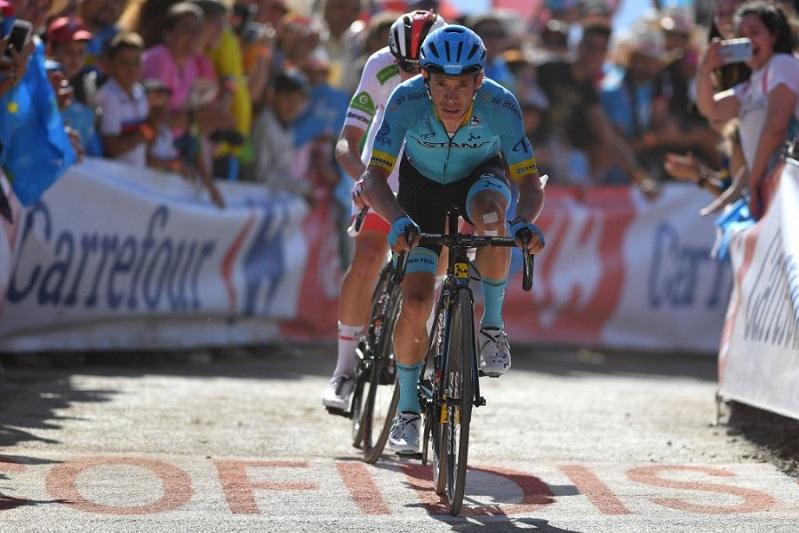 NUR-SULTAN. KAZINFORM Astana Pro Team and its leader Miguel Angel Lopez showed they are still in the game at least for a podium place of the Vuelta a España, spending a good day at the first mountain stage in Asturias (154.4 km from Tineo to Santuario del Acebo).

Lopez finished 11th at this stage 15 atop a steep 9-km-long climb to Santuario del Acebo with his main rival for a podium place Tadej Pogacar on the wheel. Thus, the Astana rider remained on the fourth position in the general classification, 17 seconds behind Pogacar, still third in the overall, the Team's official website reads.

«Today I felt much better than at the stage to Los Machucos. The team worked well and on the final climb Jakob Fuglsang and Ion Izagirre provided me a big help. When Valverde and Roglic attacked, I preferred to continue on my own rhythm supporting by Jakob and later by Ion, who organized a good chasing. I tried to attack Pogacar, but it did not work this time. However, there is another big stage tomorrow and I will keep on fighting aiming for a podium place,» said Miguel Angel Lopez.

Alejandro Valverde attacked from the main group on the first steep slopes of the final climb. He was quickly followed by the red jersey Primoz Roglic and, thus, both riders arrived together at the finish line atop Santuario del Acebo, 2 minutes 14 seconds behind the stage winner the American Sepp Kuss, who won after a solo attack from the breakaway group. Miguel Angel Lopez followed by Tadej Pogacar finished 41 seconds behind Roglic and Valverde.

The second week of the race will end tomorrow with stage 16 from Pravia to Alto de la Cubilla. It will be a 144.4-km-long stage with three climbs of the first category.