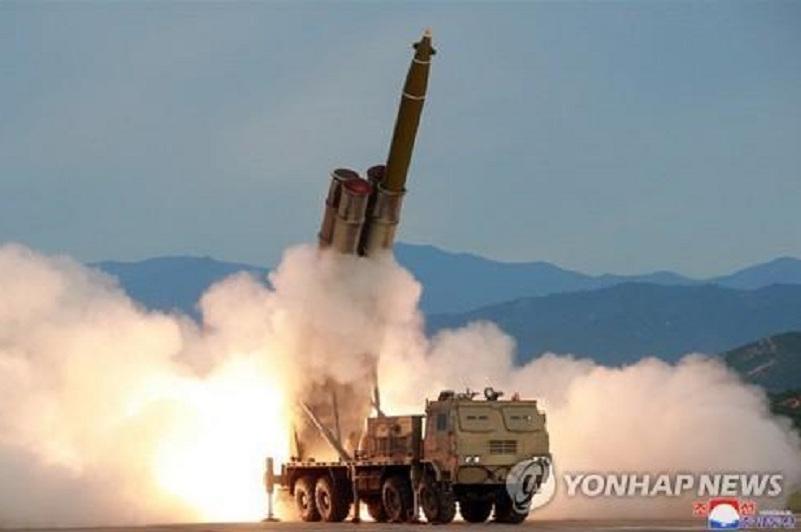 SEOUL. KAZINFORM - North Korea fired two short-range projectiles from a western region toward the East Sea on Tuesday, South Korea's military said, just hours after the communist nation offered to resume nuclear talks with the United States, according to Yonhap.

The projectiles were fired from areas in the city of Kaechon, South Pyongan Province, about 80 kilometers north of the capital, Pyongyang, in a northeastern direction, the Joint Chiefs of Staff (JCS) said.

Both flew around 330 km across the peninsula, reaching a maximum altitude of around 50 to 60 km, the JCS said, while declining to confirm if the two projectiles landed in the East Sea or how fast they flew. The JCS added that South Korean and U.S. intelligence authorities are analyzing their exact type.

In response to the latest launches, South Korea held an emergency National Security Council (NSC) meeting, presided over by Chung Eui-yong, chief of the presidential national security office, and reviewed the overall security conditions on the Korean Peninsula, according to Cheong Wa Dae.

In Washington, a senior U.S. government official said it is aware of the latest missile launches and is closely monitoring the situation in cooperation with its allies.

Tuesday's firings were the 10th such launches so far this year, during which the North tested new types of missiles or multiple rocket launchers in protest of joint military exercises between the U.S. and the South, among others.

«Given that the projectiles were fired from a western region, North Korea appears to have test-fired weapons it already tested previously,» Kim Dong-yup, a professor at Kyungnam University's Far East Institute, said.

North Korea generally test-fires weapons from its eastern region into the East Sea, and then, after building some level of confidence, takes them to western areas for additional launches, Kim added.

During the previous nine rounds of tests, North Korea was believed to have showed off four new types of weapons: its version of Russia's Iskander ballistic missile; its version of the U.S.' Army Tactical Missile System (ATACMS); «a new large-caliber multiple launch guided rocket system» presumed to be a 400-millimeter one; and the super-large launcher.

Meanwhile, Japan has not asked South Korea to share intelligence with regard to the latest firings, though it made such requests right after the North's previous test last month.

The pact was set to expire in November, and the South Korean defense ministry has said it will continue to exchange classified information with Japan, if needed, until its expiration.