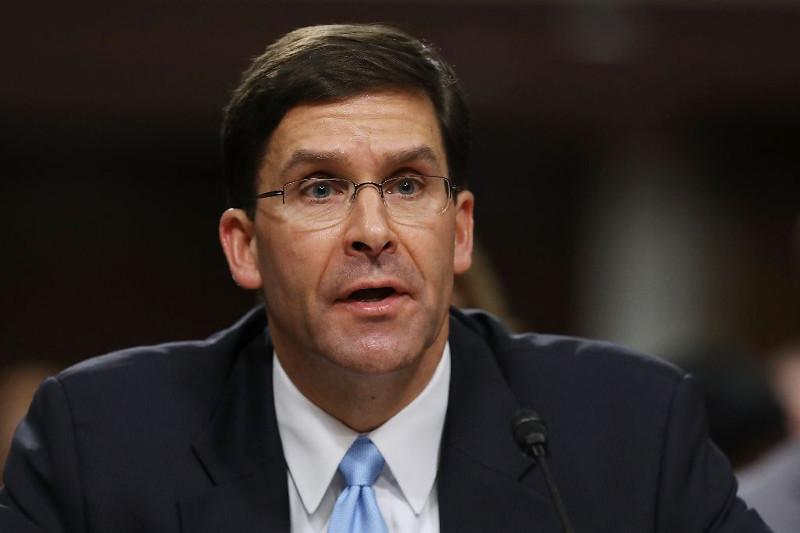 The trip comes as North Korea continues its military provocations against South Korea's joint military exercises with the United States and as Washington reportedly wants Seoul to increase its contribution to the cost of stationing 28,500 American troops in its Asian ally's territory.

During his stay in Seoul, Esper will meet with South Korean Defense Minister Jeong Kyeong-doo and discuss key issues related to their alliance, including the security situation on the Korean Peninsula, denuclearization and the transfer of wartime operational control, according to Seoul's defense ministry.

The ministry said Esper's first trip to South Korea as defense secretary will principally serve a chance to reaffirm the broad principles of the South Korea-U.S. alliance.

But the talks may also cover the defense cost sharing issue, as well as the U.S. calls on allies to join a maritime security initiative in the Strait of Hormuz, off the coast of Iran.

South Korea and the U.S. are expected to start negotiations to renew their cost-sharing deal, known as the Special Measures Agreement, before the current one-year accord expires at the end of the year.

U.S. President Donald Trump has made it clear that he wants U.S. allies to pay more for the stationing of American troops, and the administration has been conducting a review of U.S. burden-sharing policy worldwide.

A South Korean newspaper earlier reported that U.S. National Security Adviser John Bolton asked Seoul during his trip here last month to raise its contribution to sharing the burden to US$5 billion, an almost sixfold increase from the current level of 1.04 trillion won ($881 million), which itself is a 8.2 percent increase from last year.

Speaking to the National Assembly on Tuesday, South Korean Foreign Minister Kang Kyung-wha said the allies share an understanding they will negotiate toward «fair cost sharing at a reasonable level.»

Whether Esper will make a formal request to dispatch South Korean troops to the Strait of Hormuz is also drawing attention.

Seoul is reportedly considering sending its Navy's anti-piracy Cheonghae Unit from off Somalia to the Strait of Hormuz if there is a formal request.

The issue of South Korea's bilateral military intelligence-sharing deal with Japan, named the General Security of Military Information Agreement (GSOMIA), may also be discussed during the upcoming talks.

South Korea is inching toward scrapping the agreement, an official said after a senior-level tripartite meeting of the government, the ruling party and the presidential office on Japan's decision to remove South Korea from its list of preferred trading partners.

The agreement -- signed in 2016 -- has been automatically renewed each year in August. It will expire in November, however, if either party notifies the other of its intention to scrap it 90 days in advance.

Washington, however, has voiced its strong support for the agreement.

On Monday, South Korea and the U.S. plan to conduct a joint military exercise aimed at testing Seoul's ability to retake wartime operational control from Washington.

North Korea has warned that if the exercise goes ahead, it will affect the regime's decision on whether to resume working-level talks with the U.S. on dismantling its nuclear weapons program.