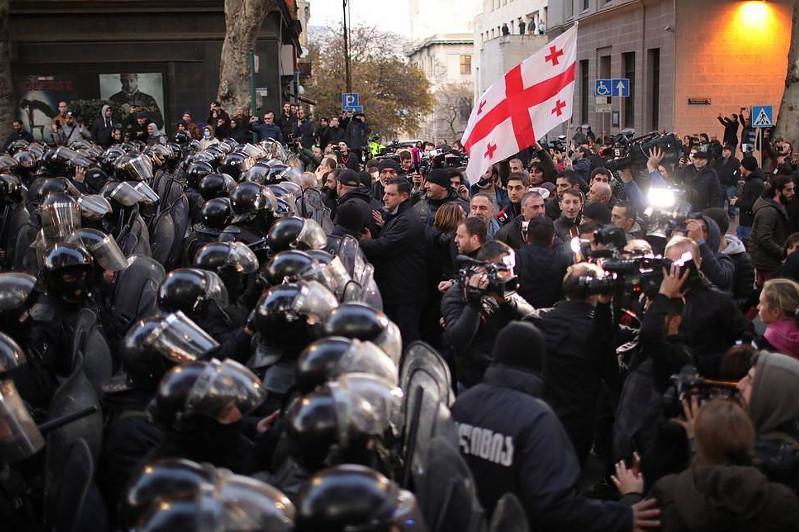 TBILISI, November 19. /TASS/. A total of 37 people have been detained and four injured in the protests outside the Georgian parliament, the country’s Interior Ministry said in a statement on Monday.

«On November 18, during the rally outside the parliament, 37 people in total had been detained for ‘disobeying the legitimate orders of law-enforcement officers’ and ‘petty hooliganism’,» the ministry said in a statement.

According to the document, four people - two of them police officers - were injured in the unrest. All of them were taken to hospitals.

On Monday afternoon, riot police units of the Georgian Interior Ministry used water cannons and tear gas to disperse protestors who blocked all entrances to the country’s parliament. The Rustaveli Avenue, where the parliament building is located, is now open for traffic, TASS reported. Although groups of protesters are still present in the area, they are standing on sidewalks and do not block roads.

Meanwhile, the country’s health ministry said three people had been admitted to hospitals in the wake of the unrest, including one police officer.

«Ambulance crews delivered only three people to medical facilities. Among them is a police officer, who was injured in the head. He was delivered to undergo the required examinations,» the ministry said in a statement.

According to the statement, the other two individuals listed as injured are a 44-year-old man hospitalized with chest pain and a 27-year-old young man who passed out when the rally was being dispersed.

At least 9 killed after flash flood brings down crowded bridge in Indonesia
News from dashboard.idealmedia.com
Popular