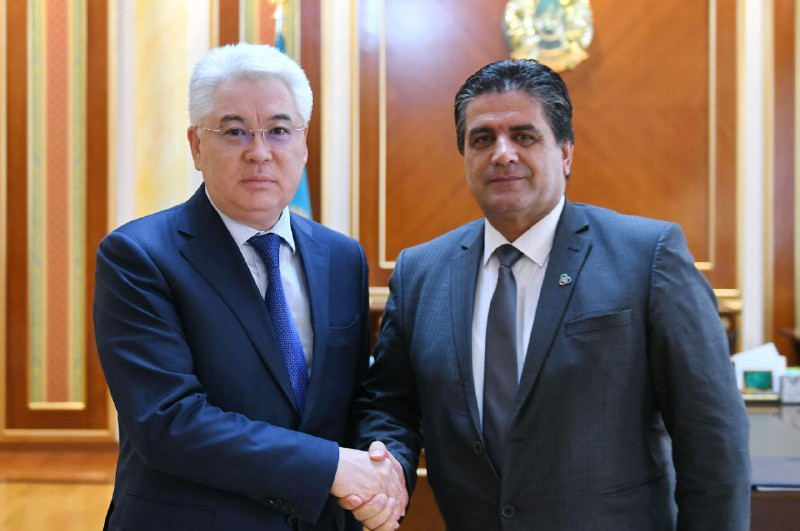 In the course of the meeting, the Kazakh Minister said that Tajikistan became the fourth in the CICA history country presiding in the organization. Beibut Atamkulov thanked Habibullo Mirzozoda for active efforts on further promotion and development of the organization.

Special attention was given to the preparation for the oncoming 5th jubilee Summit of the CICA slated for June 14-15, 2019 in Dushanbe. The sides exchanged views on the final document of the Summit - Dushanbe Declaration.

Beibut Atamkulov expressed confidence that the forthcoming event would become a significant contribution to the implementation of the CICA objectives and principles aimed at strengthening the dialogue and trust in Asia.

The parties agreed that in 27 years the CICA had transformed into a full-fledged effective forum ensuring search for mutually acceptable measures of solution of the problems and conflicts in Asia. Adhering to the tendency of multi-polarity and regional cooperation, the CICA positively impacts the growth of mutual trust and development of a new architecture of security, stability and development on the Asian continent.

The parties pointed out the relevance of 3D initiative outlined by the First President of Kazakhstan Nursultan Nazarbayev at the II Road and Belt International Cooperation Forum in Beijing and backed by many participating countries. The sides discussed the prospects of interaction of the CICA and OSCE in strengthening the interregional cooperation and transcontinental security.

Upon completion of the meeting, the sides emphasized the importance of further institutionalization of the CICA and improving its personnel potential.
The idea of convocation of the CICA was first proposed by Nursultan Nazarbayev at the 47th session of the UN General Assembly on October 5, 1992. The goal of the initiative is in aspiration to create an effective and acceptable structure on ensuring peace and security in the region with the headquarters in Nur-Sultan.

27 Asian countries are the member states of the CICA today. 8 countries and 5 international organizations are the observers of the forum.

In September 2018, on the sidelines of the 73rd session of the UN GA, the chairmanship in the Forum was transferred from China to Tajikistan.